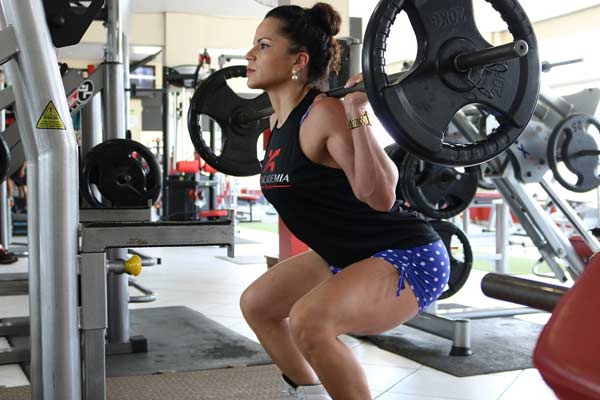 No one ever said that building muscle would be the easiest task in the world. If it was, there would be a lot more people looking like they were built from stone and fewer people not having to work so hard in the gym.

There are a number of problems why someone might be having trouble in reaching their bodybuilding goals. But there’s good news in that these are issues that can be fixed and it doesn’t require too much science to understand.

Just keep in mind that the following tips will not give you a comic book hero’s physique overnight – there’s no easy way to do so, period.

But identifying where you are having trouble is the first step in truly making strides toward your gains and goals. In fact, you’ll make progress at a much more efficient rate than before.

You are lifting too light

If you aren’t getting at least 70 percent of your maximum rep during your lifts, then your training is not very effective.

You can go below this line if you are doing warmups, but to really build muscle means having to stay within that 70-85 percent line of your maximum lift and keeping yourself between six to 20 repetitions for each set –depending on what lift you are doing.

Now there are times when you can try to add more weight to your lifts, but you should keep the repetitions low per set.

For example, if you are going to do between 90 and 95 percent of your maximum lift, you should be doing only two sets of exercises like bench press, overhead press, squat, and deadlift – usually no more than three lifts per set.

In many commercial fitness centers, there are a majority of people might rest too long in between sets. When trying to build muscle and meet your goals, you should have no rest periods longer than two minutes.

Use a stopwatch, or set your watch alarm, to keep yourself honest so that you won’t find yourself slacking too long.

Usually, the time it takes to put more weight on a bar or machine is enough to fill those two minutes – maybe a chance to drink some water as well – before doing another set.

For those looking to build more strength, the rest can be anywhere from three to five minutes between sets. People wanting to improve for hypertrophy should have a lot shorter breaks of about 90 seconds.

The simple saying is a classic that still holds true – you get out the effort you put in. Having frequent training sessions will allow your muscles to grow more and allow your body to better adapt to the increased workload of working out nearly every day.

A typical schedule that works for bodybuilders is going four days of intense weightlifting before another one or two days of cardiovascular exercise either through a treadmill or running sprints up and down a hill.

At the same time as there is a need to be active nearly every day of the week, you still need to have a rest day to avoid overtraining your body.

The days you take a break from the gym are the ones where you will actually give your muscles a chance to grow as a way of catching up to the demands that you have been placing on them in the gym.

Additionally, both upper and lower regions of the body usually need about 48 hours in between workouts. That means Mondays and Thursdays can be focused on upper body exercises while Tuesdays and Fridays can be on the lower body, with cardiovascular being on Wednesdays and Saturdays – Sunday is a day for rest.

You want to pick the exercises that are known for building the muscle you want through compound lifts and less on isolation work. The more you can build during each workout means the more growth you will trigger during those rest days.

Focus on lifts like squats and presses instead of bicep curls, tricep extensions, and leg curls. These are merely time wasters.

Hopping from program to program

Some people will make a switch between workout programs every couple of weeks and that isn’t enough time to see if it will bring you the results that you want and desire.

Some successful programs might require a few months at the very least. A perfect rule to follow is to give a specific program about two or three months before assessing whether it works for you and your goals.

Doing the same program for too long

On the other hand, you don’t want to be trapped in the same regimen and do the same exercises day in and day out. While not only are you risking boredom going to the gym with the same old routine, your body might become equally bored and begin to plateau in the goals you have set for yourself.

Your diet isn’t cutting it

Sometimes you need to eat more to have calories lead to building mass in those muscles you have targeted.

If you aren’t eating enough foods filled with proteins and carbohydrates, or you aren’t eating more calories than your body needs to keep itself energized, then you won’t see the muscle growth you are hoping for.

This should be a given for anyone in fitness – get at least eight hours of sleep every night. Just like you need the rest day for your muscles to rebuild and grow, you need sleep so that you can be well-rested every day before doing a workout in the gym. Let’s not have you risk wanting to take a nap while holding 300 pounds over your head.

Lack of connection between body and mind

This is more about being focused on the movements you make and the muscles that are being worked out.

Feeling how the different muscles are being contracted and expanded during each lift can help you better perform in the weight room.

Consider it like when a basketball player is tuned in physically and mentally when shooting from beyond the three-point arc and how the commentators say “he’s in the zone.”